You can search for all Fishkill and Dutchess County NY homes, townhouses, condos, multi-family, land, and foreclosures for sale. Click on the button below to see all homes for sale in Fishkill NY:

Living in the Town of Fishkill NY

In 1714, Dutch immigrants decided to settle and prosper around the modern day village of Fishkill. They named the town Fishkill, which evolved from two Dutch words, “vis” (fish) and “kil” (stream or creek).

Nowadays, Fishkill is a suburban town with convenient shopping and road access. There has been plenty of new construction going on, from large single family homes, townhouses, to condo complexes.

The Fishkill NY real estate is much more affordable than towns to the South in Westchester County, and has a larger selection of newer and spacious homes. The town offers many child friendly activities. On the weekends you will see children playing outside, wearing uniforms of the many sports teams they participate in.

The major employers in Fishkill are IBM and Global Foundries at the Hudson Valley Research Park in East Fishkill. Some residents work at the IBM campus in Poughkeepsie. The Gap Distribution Center is also located in Fishkill.

The town of Fishkill contains the Village of Fishkill, and surrounds the City of Beacon.

In the Village of Fishkill, Main Street is lined with quaint buildings that gives a small town feels. The City of Beacon has become a popular weekend getaway for New Yorkers, and many transplants who are looking for more space, a beautiful setting along the Hudson River, and convenient commute to New York City.

Some of the facts regarding Fishkill real estate (All data from the US Census):

There are many single family home, townhouses, and condo communities in Fishkill. The newest ones usually have a managing association that takes care of maintenance like snow plowing, and have amenities like a club house, swimming pool, tennis courts, and playground.

One of the largest newer home communities in Fishkill is the Van Wyck. The development is built by Toll Brothers in the late 2000s, and occupy the area along Merritt Blvd. Some of the units in the developments are still being built and are brand new.

All three communities have their own swimming pool, club house, and other amenities. They are charged a condo fee each month, which includes snow plowing and lawn maintenance. The Van Wyck includes:

Some other townhouse and condo communities in Fishkill include:

Some of the popular neighborhoods in Fishkill include Dutchess Park, Forge Brook Meadows  and Maurerbrook. Riverwalk and Stony Kill View are newer single family homes developments built in the 2000s.

Looking to sell your home in Fishkill? Can't find what you're looking for, or have a question? Contact Us today and let our team of talented local professional Realtors help you.

Fishkill is located on the border of Dutchess County, just North of Putnam County. Fishkill has convenient access to I-84 which connects to New England and across the Hudson River, and the Taconic State Parkway that runs North and South throughout the county.

Fishkill is convenient to the shopping strips of Route 9. Poughkeepsie is about 20 min North via Route 9. The local State Route 52 runs through the Village of Fishkill.

The town of Fishkill is approximately 65 miles North of New York City. The closest Metro North stop from Fishkill is the Beacon train station, which is an hour and a half from Grand Central Station.

There are a few cute cafes and restaurants on Main Street in the Village of Fishkill.  Some of the popular restaurants in Fishkill are:

Most of the shopping options are the large chains. There is a Walmart and Sams Club, Home Depot, a movie theater, and other big box stores and supermarket, along Route 9, close to the I-84 exit. There are more stores located along Route 9, along the way up to Wappingers Falls and Poughkeepsie.

Two larger gyms, All Sports and Golds Gym, are located in Fishkill.

A little outside the center of village, Fishkill offers a lot of open space, parks, and farms. A popular farm to visit is the Fishkill Farms, a beautiful apple orchard with a farm store that opens year round. Another fun farm to visit is the Stony Kill Farm and Environmental Center. Children can go visit the animals there, attend one of the frequent events, or take a hike.

Also located in Fishkill is the Splashdown Beach water park, a very popular place for families in the summer. The minor league baseball team, the Hudson Valley Renegade, affiliated with the Tampa Bay Rays, play at the Dutchess Stadium in town. The Dutchess Stadium opened in 1994 and holds 4,500 people. It also hosts concerts and events. 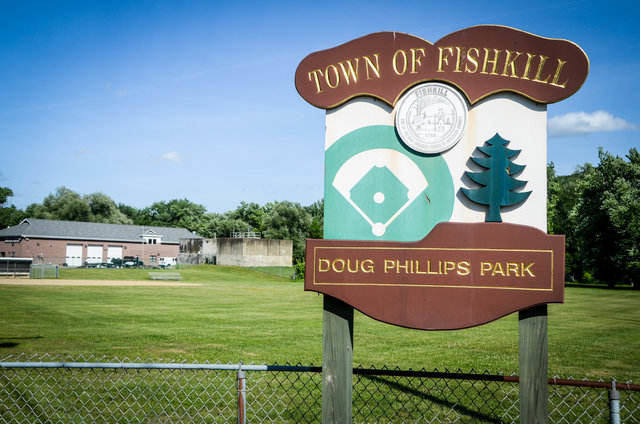 Below is a list of Town of Fishkill Parks:

Passive recreation, tot-lot with swings, and a pond for fishing

The town of Fishkill Department of Recreation website: www.fishkillrecreation.com

Life's finer moments can have no more appropriate setting than this 99+ acre country estate known as Willow Lake Farms. As you enter through the stone pillars of this un...

Welcome to 767 Route 9 and 33 Givens Lane in Fishkill NY. These two properties are being sold together and can be a great opportunity for an investor. With both lots comb...

Welcome to Malouf Mountain Sunset Campgrounds. Would you like to own your own campground? Turn the main lodge into an Airbnb or have as your private residence? Get additi...

Home is where the heart is and you WILL fall in love with this house!! Imagine calling this spectacular, spacious colonial your new home. Nestled in a well maintained ne...

HOME IS TO BE BUILT. PHOTOS ARE FROM A PREVIOUSLY BUILT HOME. Located only 1 Hr and 9 Minutes from New York City, Be minutes from the restaurants and shops in t...

Welcome to 31 Sunflower Circle!!! The grand entry foyer features a spectacular chandelier and a curved staircase leading to the 2nd floor. A formal dining room and a lar...

This stunning home is in the process of being built and features an open Floor Plan with 4 bedrooms. There is a generously sized primary en suite on the first floor along...

One of a kind property within the sought after Lomala Community. Two single family homes on over an acre of land on a private cul-de-sac surrounded by lush greenery and ...

Dreaming of running your own business? Looking for a great income producing investment ? Here's your chance to have the best of both worlds. Located at the busy corner of...

One of a kind contemporary home with 36x36 semi-detached 5-car garage/workshop. On cul de sac. Home was completely renovated in 2006. The 4-bed, 4-full bath Contemporar...

Welcome to this stunning home situated on a cul-de-sac. Step into the two-story foyer with ample natural light. The home features a large formal living room and formal di...

LAST LOT AVAILABLE TO BE BUILT - in this new 6-parcel East Fishkill/Wiccopee community, Lincoln Square. Parcel sizes range from 1.23 to over 3 acres. Lot 6 is 1.96 acres....

Nothing to do but move in to this completely renovated colonial located on almost 2 acres of property on a cul-de-sac in the desirable Baxtertown Estates community in Fis...

Custom Built Log Home on over 2 acres of wooded property. Like a cabin in the woods but in the heart of Fishkill. House is solidly built with top materials including an a...

Experience 'Champagne wishes and caviar dreams,' to quote Robin Leach from the Lifestyles of the Rich and Famous. You deserve to be the proud owner of this beyond beautif...

In Wappingers Falls there is 4 bed, 2.5 bath spacious colonial property w/ 2 car-attached garage & 2,636 sqft. of living space. Walk through the foyer into a massive semi...

BEAUTIFUL PARK LIKE SETTING ON 2.5 ACRES OF PROPERTY CLOSE TO BOTH THE VILLAGE OF FISHKILL AND BEACON. THIS HOUSE WAS TOTALLY REMODELED AND ADDITION CONSTRUCTED IN 2013. ...

Welcome home to 12 Sunset Hill Road W. This lovely single level Ranch is tucked away on 0.39 acres on a dead end road. Mature trees frame the mountain view's for this pro...

Attention All Investors!!!! - 2 commercial/residential properties being combined and offered for sale at a discounted price. Property A includes a single family colonial ...

Move in for the upcoming holidays! This is what you have been searching for! Southern Dutchess County, great location & close to all you need and great for commuting too....

Welcome to 26 Nantucket..... This Oversized Ranch Sure Has Much To Offer! Newly Renovated Kitchen,Granite Counter-Tops,Stainless Appliances With Newly Renovated Bathrooms...

Beautiful, nicely updated Raised ranch in Brinkerhoff neighborhood featuring the largest yard in the area. The pride of ownership shines through in this 5 bedroom, 3 Bat...